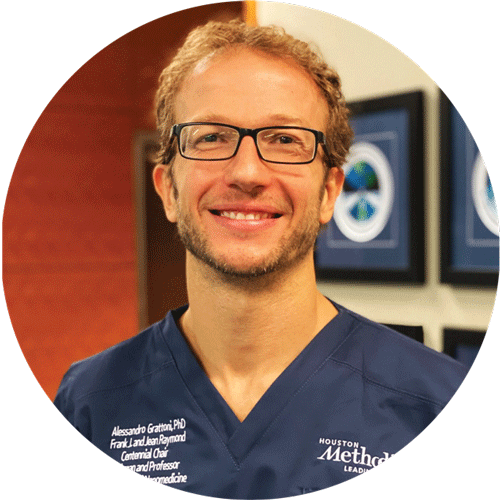 Alessandro Grattoni is Frank J. and Jean Raymond Centennial Chair and Professor of the Department of Nanomedicine. He received his Bachelor’s and master’s degrees in Mechanical Engineering in 2005 and PhD in Biomedical Engineering in 2009 from Politecnico di Torino, Turin, Italy.
Dr. Grattoni’s research is dedicated development and clinical translation of implantable technology platforms for controlled long-acting drug delivery and cell transplantation. His research motivation is to improve the treatment and management of chronic diseases by combining advances in engineering, biology and medicine.

In his spare time, Alessandro is a triathlete who enjoys mountain biking, running and swimming. He loves competing in triathlons, where he has numerous podium placements in worldwide competitions. He also enjoys surfing.